Yup! this can happen, especially if you have succeeded in making one channel break the egg of 100 thousand subscribers…

Of course, creating the next channel will be much easier.

But if you are careless, it could damage the reputation of the main channel that has been formed…

Then how can that happen..? It could be because of the popularity and style that many people like, so when a new channel is associated with an already popular channel, people will also be curious.

At least from 1 million subscribers, there will be a minimum of 10% who stick.

Then how come it’s so fast? here he is…

I’m sure he already got the recipe… 🙂

That is how to keep the retention and watchtime full … especially if it’s above 50%, then Youtube will be more aggressive in recommending the content,

What is Retention? what is watch time?

Then you are usually directed to the main dashboard, after that you can directly click on the “Analytics” side menu, after that click the “Engagement” tab or in Indonesian “Interaction”.

There is a count of “Watch Time (hours)” in hours. If your Youtube Analytic is set in Indonesian, then Watch Time changes to “Watch Time (hours)”, actually you just need to memorize the layout, if you don’t want to be complicated by language problems… but I’m sure you already understand this…

Have you ever applied for monet? there is a requirement of 4000 hours of broadcast right.. 🙂 So I think it’s like a signal, if your broadcast hours are higher, it allows the system to consider you a professional in the field of the channel you are presenting.

can also reach 4000 watch hours with just one video…

And this has crossed the line for monetization review.. 🙂

Because, if at the beginning, interest in the video is low… usually it will be difficult to develop, and if that’s the case, then views will be able to

It’s hard to develop bro… for that video…, because the broadcast time is already jammed…

It’s true that “what is” is not suitable when we are not who we are… 🙂 … because people tend to be lazy, unless it’s true that what you bring is all meat…

Okay, so it’s starting to show here, huh, if Watch Time it is the sum of the accumulated time that your overall video viewers spend.

Later, the details will be displayed watch time each of your videos.

The value in the watch time section is based on the time range that you can change. The shortest data is 7 days… while normally it’s 28 days… (remember that you get paid every month, right… 🙂

So, it could just be resetting the metrics again… so the right time to experiment is the beginning of the month… oh no no… I just remembered… the calculation for Monetization Pass is 365 days, that means 1 year… where if you don’t reach your target, you will back off, but you don’t just lose your previous watch immediately, but it keeps shifting.

example, you have almost reached 4000 hours of viewing, eh, it turns out that the subscribers have not reached 1000, so when the days are added, the calculation of watch hours that exceeds 365 days will disappear…

And so on… so it doesn’t immediately change to 0.

So what is retention?

If that was the amount of Watch Time, then rate this is the average percentage of video performance. This is very important bro.. and actually this is the overall average or equal to watch time earlier. We can see the rate/aaudience rating more specific in “Advanced Mode”

And the calculation can also be adjusted based on a certain time frame. 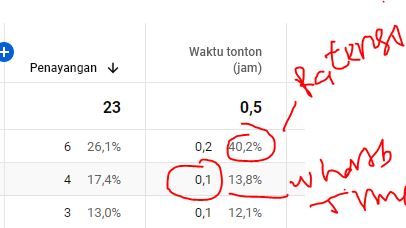 You can see in the image I screenshot above, I’ve marked it rate and watch time.

The higher the rate or average viewing percentage, the more recommended youtube will be, which can reach many people.

There is a way that I can describe for you … it can be updated later according to the times:

Upgrade Watch Time and rate Youtube videos need flying hours, to get the formula also need in-depth analysis, the more you analyze it, the more you will be able to understand your audience.

So it takes time too, besides that.. by doing continuous analysis, then you will also become familiar with “Youtube Studio” hehe..

*The most important thing bro, in creating content you need to understand that what you upload can be your digital footprint… so “many views” of Viral videos… it’s not an important thing…

most importantly, create content that is useful and can have a positive impact on the audience.

That’s all the discussion this time about How to Increase Watch Time and Rationale on Youtube Channels.

May it be of benefit.