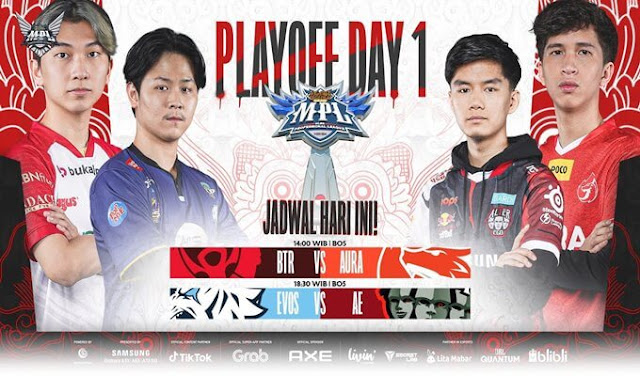 The MPL Season 9 playoffs have entered the first day (Thursday, 21 April 2022) where that day there were two very exciting matches. The first match took place at 14:00 WIB which brought together Aura Fire against Bigetron Alfa, the two teams were equally strong and fought each other because in this match whoever lost would be killed.

Playoff rules apply BO5 (Best of Five) so whoever team succeeds first gets 3 points then he is the winner, but if it results in a draw, which is 2, then one more match is determined.

Now in match 1, Aurafire, the esport team that was strengthened by High, Kabuki, God1fa, and their friends gave a good fight against Bigetron Alfa. Even though they lost points in the first and fourth matches, in the end, at the point of determination they (Aurafire) managed to beat the Bigetron Alfa squad. As a result, High and his teammates can move on to the next match where they will meet Onic who has been waiting.

One of the teams that I support, namely Alter Ego, had to accept defeat against Evos with a score of points (2-3). Between proud and sad, I am proud because Alter Ego has given their best performance and sad too of course because this defeat resulted in them having to go home.

Alter Ego, a team that was strengthened by Udil, Nino, Celiboy, and others at the beginning of the game, was 2 points behind. However, they had time to restore the situation to 2-2 even though in the end during the decisive match they had to lose to Evos. It must be admitted that they are really compact and neat to be able to take advantage of every blunder what the Alter Ego team does.

Evos Legends, a Mobile Legends espots team that has been strengthened, includes: Rekt, Antimage, Verxiic, Cloverand Vaanstrong has put up a pretty tough fight against the Alter Ego. Until finally Evos won the match and qualified for the next round against the waiting team, RRQ Hoshi. Of course it will be a very exciting match because it brings together two big teams and they are the King and Legend with the most fans in Mobile Legends at this time.

*To find out the time for the next match, see the Official Schedule for the Playoffs MPL ID Season 9