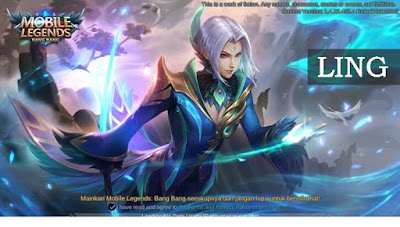 What the Assassin players have been waiting for has finally come out with a new hero in the Mobile Legends game: Bang Bang, the hero named Ling. This Hero Ling has a Burst Damage specialist, he can jump over walls and attack enemies from above.

The first time I saw Jess No Limit playing the hero, I thought it was a fan with the new skin, but it wasn’t. Indeed, this new hero also has very high mobility, you could say it is similar to Fanny’s mobility. Heard that he originally had the name Qing Que, but changed to Ling.

Tips on How to Use Hero Ling

As a Role Assassin like Gusion and Hanzo heroes, Ling is suitable for using hit and run tactics where Ling finds the right time to attack enemy core heroes. As a new user, you need to understand very well that this hero is weak so you need careful consideration when you want to attack your opponent, try one combo to die.

With the sting of a painful combo skill, here are some tips for using Ling’s hero that Assassin users must learn.

1. First you have to know Ling’s skill

First, know all the skills and their uses, along with an explanation.

Ling’s skill in movement allowed him to jump from one wall to another. Instead of mana, Ling needed Lightness to be able to use skills.

Ling used his Lightness point to jump over the wall. As long as he is on a wall, Ling can jump to another wall without a cooldown until he returns to the ground.

Ling attacks in one direction and stabs at nearby enemies with a higher critical chance than normal attacks.

If used when Ling is on a wall, this skill will damage the area of ​​effect (AoE) and can reduce the opponent’s movement speed.

Ling will jump up and lower the sword to the ground which will deal AoE damage for a while. In this period, Ling can move freely and will not take damage from the opponent for 2.5 seconds.

This Ultimate Skill will also bring up 4 swords around AoE which when taken will reset the cooldown of skill 2 and give 5 Lightness points.

2. Study the location of the walls carefully, gang, because you will be required to jump from one wall to another in using Ling.

3. It should be noted that Ling cannot use the walls at the end of the game area, only the walls in the middle.

4. Always pay attention to the Lightness point you have because you need that energy to be able to jump to other walls.

6. In addition to critical parameters, you can also use lifesteal to survive or attack speed to strengthen attacks.

7. Remember, the ultimate skill makes Ling unable to be attacked, so it can be used to survive if you are in a hurry, gang.

8. Use a combination of skills to finish off opponents quickly because Ling is too fragile for normal 1v1 contests like most other Assassins.

Here is the statement,

Warrior Boots – As a hero assassin, Ling needs an item to increase movement speed, especially in the early game so that he can roam quickly.

Berserker’s Fury – After having the shoe item, Ling needs a damage item so that he can do a lot of damage in the early game.

Endless Battle – To maximize the critical damage that can be inflicted from Berserker’s Fury items, you can combine these items with Endless Battle.

Malefic Roar – If you face a tank with a hard defense like Uranus or Khufra, then you need an item that can increase physical penetration to penetrate enemy armor.

– Has its own habitat on the wall that can’t be contested except by a few heroes.

– Can move quickly from one point to another by jumping from one wall to another.

– Ultimate Skill can be used to escape when it is pressed or when surrounded by opponents.

– Skill 2 Ling has a short cooldown and is difficult for opponents to dodge.

Besides having the advantages of Ling’s hero, there are also disadvantages, of course, every hero has that, especially if you have a Ling counter, you need to pay attention to when playing in ranked mode.

– Must memorize the location of the wall if you want to move quickly on the map which is the most important thing in playing as an Assassin.

– Jumping from one wall to another requires Lightness points, so just moving Ling requires a lot of energy.

– Very fragile and since Ling needs Lightness points to escape, it can be serious if Ling’s combo fails to kill the opponent.

That’s it Guys build items and also tips on how to use Ling Mobile Legends hero, hopefully it will be useful for beginners.
Also read: Tips and Tricks How to Play Lylia