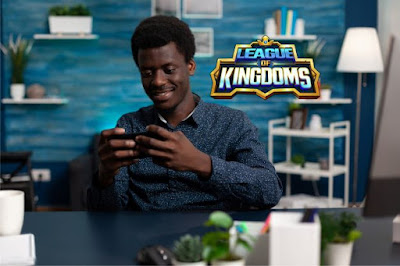 Maybe there are still many of you who are not very familiar with how to get money from playing games.

But the fact is that now there are more and more games that can be used to earn money. Some of them even promise quite promising income for gamers.

Among the many games that can make money, League of Kingdoms is an interesting choice.

Because this game presents an unusual gameplay and story and is not like online games in general. So it is natural that many people are then interested in playing this game.

What is League of Kingdoms Online Game

League of Kingdoms is a massively multiplayer strategy game that focuses on building empires and managing them.

When playing this game, you will become a ruler who is tasked with building a dream empire and managing it as best as possible.

cash-generating games in general, League of Kingdoms includes games that carry NFT in it.

Game NFT or Non-Fungible Token is a type of game that will generate tokens and can be exchanged for crypto assets.

So when playing this League of Kingdoms game, you will not immediately get a prize in cash.

However, you will get special items that function as tokens and you can trade them later.

As a game based on crypto token coins, generally this game is built using Blockchain-based technology.

However, from the user’s point of view, there are almost no striking differences with the concept of games in general.

of Kingdoms does not only carry the theme of strategy related to the process of developing the kingdom alone. But in it there are also elements of war that will make the game even more exciting.

You have to be careful because the kingdom that was built could be attacked by other players at any time.

so, you can also attack the territory of other players’ kingdoms to get interesting resources from the loot.

How to earn money in League of Kingdoms

As one of the best making money apps, you can do a number of different activities to earn money from this game.

For those of you who are curious about what you can do to earn money from this game, here is the full review.

How To Get Money In League Of Kingdoms : Win The War

One way to earn money in League of Kingdoms is to win during battles.

When playing League of Kingdoms, you have to build and develop an empire according to your creative power.

There are many things that need to be built to make your empire grow even more. Starting from buildings, facilities, fortifications, and even soldiers for war.

must set the strategy appropriately and accurately so that the development process runs optimally and optimally.

After the kingdom you build can grow rapidly then you can do war with other kingdoms.

You can attack other players who have large and abundant royal resources. The more abundant resources you have, the better it will be to attack.

But you also need to be careful because other players will also have a line of defense to protect their territory.

So make sure you have a strong army and weaponry when attacking.

When you manage to attack another player’s territory and win the war, then you can get a reward. The prize is in the form of coins that can be exchanged for crypto money.

The more often you win, the greater the potential for rewards.

In the end, you can collect more crypto which can then be exchanged for cash.

The next way that you can use to earn money from League of Kingdoms is to complete every mission in the game.

Those of you who play the NFT game titled League of Kingdoms will also be treated to a variety of unique and challenging missions.

main task is to complete these missions to completion according to the given task.

After you successfully complete the given mission, you will get a pretty interesting reward.

Later, the reward will be exchanged for NFT crypto coins according to what you get.

When you successfully complete the mission, the reward given is in the form of DAI coins. You need to know that currently the value of this DAI coin is in the range of Rp. 14,000 for every single coin. Later, you can also withdraw the money directly via PayPal.

Generally, the more missions you can complete, the bigger the rewards.

So you can get large amounts of crypto from these NFT-based games.

Therefore, if you are interested in getting money from games, League of Kingdoms can be an option that is worth considering.

Especially now that the use of crypto is increasingly popular so you don’t need to be confused anymore when you want to exchange it for cash.

The next way you can consider if you want to earn money from the NFT League of Kingdoms game is to sell your account.

This method may seem a little extreme because you will sell all assets and accounts in the game.

As is well known that online games are one of the most popular games for many people.

Likewise with the NFT-based game called League of Kingdoms. The number of fans is quite large, so you can sell your account to other players.

So that the account that you are going to sell is getting a lot of attention from League of Kingdoms players, make sure that it contains a lot of valuable items.

The more items in your account, the higher the potential price.

For example, the higher the number of DAI coins in the account, the more expensive the market price will be.

But to avoid things that are not desirable, make sure you make transactions carefully and carefully.

There is nothing wrong if you use a trusted platform to make these transactions to avoid fraud, scams, and other potential financial crimes.

Those are some ways to earn money in League of Kingdoms that you need to know. Now with these reviews, you don’t need to be confused anymore if you want to earn money from playing online games.