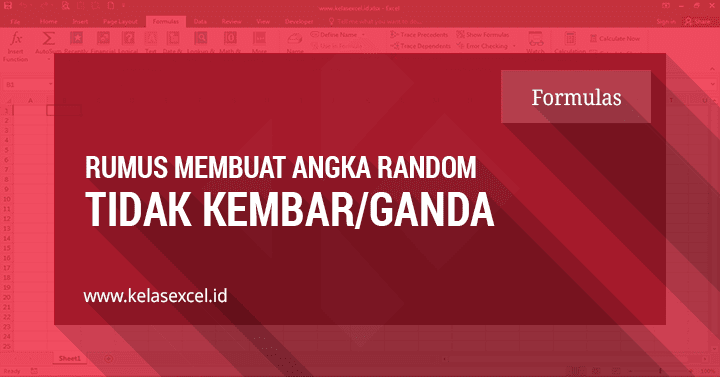 Some time ago there was a question to our contact about how to create unique and non-twin or repeating random numbers in excel.

As we discussed earlier to generate random numbers in Microsoft Excel, we can use the RAND or RANDBETWEEN functions.

If we want random numbers from 1-10 then we can use the Rand between function with the following formula:

If you make ten numbers with this formula, the result will be something like this:

If you pay attention, it turns out that by using the Rand between formula it is possible that the random numbers generated will be double or have duplicates, so that there will be several numbers that are repeated.

Then what is the solution to generating random numbers without these twins?

How to Make Random Numbers Without Duplicates

In this example, for example, we will generate random numbers from 1 to 10 that have no duplicates or twins.

To create non-repeating random numbers in Excel, the steps required are as follows.

How do detect and eliminate duplicate data?

Random Number Formula Does not repeat in a certain range

That’s all for our discussion this time about how to make random numbers that are not twins in excel. see you in the next tutorial. If you still have questions, please take advantage of the comments column that we have provided below.

Create by iPad guides in category of Excel Class