Update channel frequency and symbol rate iNews TV which currently broadcasts on satellite Palapa D has now moved to Telkom 4 for satellite dish users. We can add the channel from the FTA list either automatically or manually input data so that we can watch shows, whether it’s news from Inews TV.

This Indonesian national private television is run by a large family of the MNC group, previously still called sindo tv until now became Inews TV. The broadcast program often presents the latest sports news, daily general news, celebrity news and other interesting information. For those of you who don’t want to miss news from Inews, of course it is mandatory to track the satellite dish receiver at home.

We can get it with HD quality, we have to track it via Telkom satellite which is still one transponder with other channels such as Metro tv, Jak tv, Al-Manar tv and others. After that enter the frequency and symbol rate of the latest iNews TV MPEG2/MPEG4. To get the code we have provided below in full the latest 2020 update. 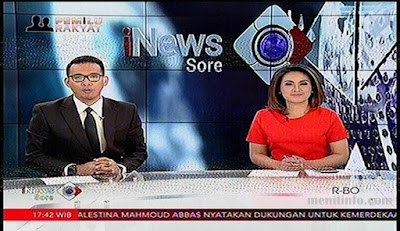 After completing tracking the iNews TV channel using the frequency code above and getting a good signal but the image has not been shown, it is possible that there is a live sports broadcast, usually randomized with a Biss Key. For that you have to be patient waiting for the match to finish before you can watch other shows from iNews TV, and hopefully it will be useful.