Latest race info Rahman Cyber – This time there is info, friend from holy district There’s a Documentary Film Contest… if you like making films, there’s a good chance… Here’s the Leaflet… 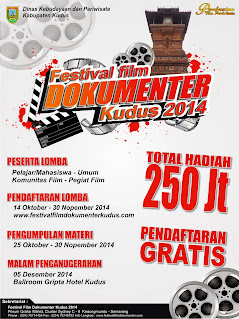 Sometimes this term is used broadly to show the realistic aspect compared to conventional story films.

Documentary is a non-fiction film. Documentary films are usually shot in a real location, do not use actors and the theme is focused on subjects such as history, science, social or the environment.

Its basic purpose is to enlighten, inform, educate, persuade and provide insight into the world we live in.

Therefore, in commemoration of the anniversary of the Kudus Regency, the local government held the Kudus 2014 Documentary Film Festival which covered aspects of life, economy, social, and cultural arts, as well as other themes relevant to Kudus.

The Kudus Documentary Film Festival is open to the public and the total prize / money for coaching is 250 million.

3 Professional Judges among others:
1. Academic Jury by IGP. Wiranegara, who works as a lecturer at Indosiar Broadcasting, Jakarta.
2. Practitioner Jury

With this activity, in addition to raising and increasing the creativity of the nation’s children in presenting the visualization of an area in the form of a documentary, it is also hoped that it will bring up visualizations of the lives of the Kudus residents which can spur the spirit of the Kudus residents in developing their region and can introduce Kudus in Indonesia in particular and the international community at large. generally so that it will create more prosperous Kudus citizens.

Documentary genre films with the theme “about the saints” from various aspects of life-economy –social-art-culture, tourism, etc. (interesting/typical) with shooting locations in Kudus
Production time from 2013-2014
Minimum duration 15 -30 minutes (including title credits)
The organizer has the right to use part or all of the contents of the film, both for the sake of this competition and for regional promotion purposes.
Materials that must be submitted are:
Completely filled registration form
film material in dvd-pal format 3. (three) pieces each equipped with a box casing
completeness of soft copy in 1 piece of CD. Consists of a synopsis and manuscript.
photo file in the movie scene in jpeg format, 1, a.3 size movie poster file in tiff format, 1, director’s photo with a minimum image size of 300dpi
Winners will be divided into categories:

I took part in this competition, by making a film with the theme of the holy city, this project I did with my college friends who came from Kudus…

How is the result?

But it’s okay, because I can walk to Kudus with my college friends, let alone make a film project… even though it’s simple… but quite impressive…