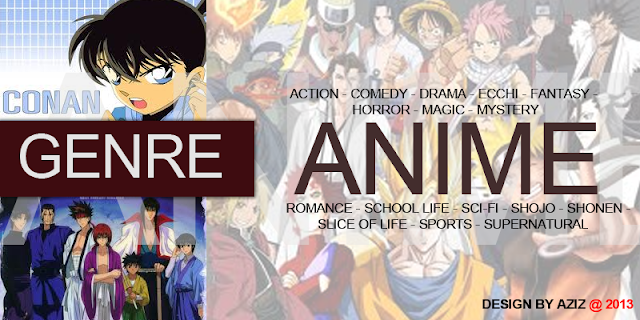 Rahman Cyber – Meaning and Explanation of Some Anime Genres – Anime that is now gaining popularity, even in the world also talking about it, turns out to have many genres, yes, the Indonesian language has many genres. Para Manga Lovers surely many know about this, why not, because to search for the manga movie that he likes on google, you must definitely type in the genre so you can get it quickly. So what are the genres…? To the point!

Here are some of the genres…

Anime that usually Shows Actions such as Fighting Scenes, violence. In this genre, there are indeed many popular anime such as Sword Art Online Full Metal Alchemy Dragon Ball

Anime that contains a story about a person or group going on a long journey for a certain reason. For this genre which I like the most, there are lots of my favorite Anime like Pokemon, Yugioh Duel Monsters, One Piece (Eh, but now I don’t follow it), Naruto (Her adventure to become Hokage)

Anime whose stories contain elements that are funny and fun to read. Actually, we really have to be selective in this genre, because we know it’s humorous… but there are anime that are pretty good, somewhat fit into my criteria like Gintama.

Anime whose meaning is inspired by an existing Anime/Manga is retold with art style and stories from imagination at will.

Anime that contains a strong element that makes the readers/audiences immersed in the story, for example elements of sadness, persistence, etc. Now this is also the anime genre that I like, for example, usually in anime movies like Kimi

Anime that contains many elements of imagination and fantasy worlds.

Anime that contains elements of gender change for various reasons, can be male to female or vice versa.

Anime that is intended for horror fans, contains elements of the horror with terror that is gripping and shocking.

Anime aimed at female readers aged between 18-30 years with art and stories that are closer to reality and less idealistic than Shoujo.

Anime, which are usually of this genre, contain fantastic and futuristic types of giant robot machines.

Anime that is widely found in detective series, readers/viewers are invited to think while following it there are many codes, words and other mystery elements. This I also like, for example Detective Conan

Anime which is usually this genre deals with mental thoughts or it could be abnormal psychology.

Anime that contains elements of love and affection between men and women.

An anime whose storyline is in everyday school life.

Anime that involves advanced technologies and other phenomena that contradict or bypass modern scientific science.

Anime targeted at male readers aged 18-25 are usually about life at university and more realistic adulthood.

An anime targeted at female readers with lots of romance and strong character development.

Anime that is synonymous with Yuri, just not as extreme as Yuri.

Anime that is almost the same as Shoujo, only this is targeted at men and usually contains elements of violence.

Anime that is synonymous with Yaoi is just not as extreme as Yaoi.

Anime which as the name suggests, this genre involves depicting the lives of one or many characters, technically it can happen in real life.

This anime series involves everything related to the world of sports such as football, basketball, baseball and so on.

Anime that involves any unexplained powerful forces or events that go against the laws of physics and other modern laws.

Well, the above are the genres that are popular to date and are the reference keywords to get Anime information that Anime Fans want… Hehe, . Red – A

Brought to you by Rahman Cyber