Hmm.. how come most of the Yu-Gi-Oh card games discussed this time! Duel Generation, FROM yesterday…? no other topic…?

Yes, I’m comfortable writing about this game, because honestly… this game is currently a trending topic among fans of the YugiOH film which has been played in 4 series, from Yugioh Duel Monster to Zexal. and the form of appreciation, yes.. The card game that KONAMI has finally developed in a mobile form that can run on both Android and IOS platforms… 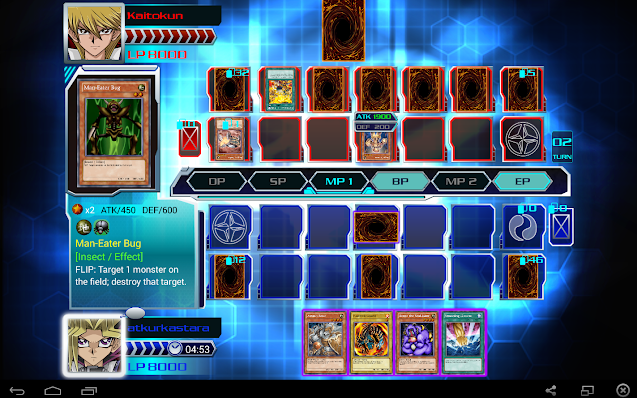 Indeed, this game is very addictive because once we enter the world, well, it will be difficult to get out if we haven’t beaten all of them… 😀 lebay

My previous post also shared a little about this mobile game, but, for this time… we will reveal some tricks in playing, to become a Strong and Famous Deck MASTER… hahaha…

But in a lawful way, you know, what is discussed here… Not How to Cheat or Crack YGO Points or Hack / Manipulate Win Streak Scores or Turn Premium Cards into Gifts...but true duelist tricks…hahaha
The principle is “The

person who enjoys the game… he is the one who wins, and the person who is too ambitious to win is usually the forerunner of defeat…”

But yes, it’s called a game… The important thing is to just enjoy it… don’t let it go in the morning – afternoon – at night until you don’t sleep because of playing this card… Ok because the loser will not be KONAMI… But you yourself… 😀

Go ahead… It’s from KONAMI party actually already provides Premium Decks that you can buy that are set as powerful as possible… with a range of Rp. 50 thousand – 100 thousand… you can buy that if you are a person with money… but… if you are not interested in buying a card premium because of the weight in the cost…
So, you can use this trick… Don’t worry.. Free Cards are not always bad… it just depends on who made the deck.

the principle in playing.. “Play normally, don’t go out of the way and don’t force yourself too much… Enjoy it”

This is the most important thing, the balance of the deck can be the determinant of your victory… Try the card that really blends with your heart that you install… hehe
Which can really give you a combo…
in the beginning, we are provided starter deck right…? try to learn from it… in compiling cards.

#Second Trick, Defeat one by one the existing characters… You will get a card from their deck

This is a classic method… but for free card users… this can be used as a means of strengthening the deck. For example, you can beat Kaiba with his XYZ Deck… then you will get 1 card from the Kaiba deck.. every time you win, there are 4 cards given for free for each character and 2 Deck Recipes for each character.

my experience, when I won against the first Kaiba, I got a card Canon X Head with 1800’s ATK and I immediately added it to my deck, to replace cards with less ATK…

#Third Trick, Try not to place a Monster Card with 2 Sacrifice, more than 2. Unless you can Special Summon it.

Remember the first point, the balance of Monster, Spell and Trap.. imagine if you have 3 or more cards that require 2 or more sacrifices… usually higher level 7 and above… (Sychro and XYZ cards don’t count, because they exist in the Extra Deck and doesn’t affect your deck balance) and you run out of monster cards to use for sacrifices… well that’s a waste…

#Fourth Trick, Make sure you have a Monster Tuner to be able to Sync

Syncro is a development that happened to YUGIOH 5Ds.. Ever heard of Stardust Dragon? If you’ve watched Yugioh 5D, you probably already know the Synchro… it’s Yusei’s flagship card… But in YUGIOH Duel Generation… it’s included in the Premium Card… Too bad… hehe

#Fifth Trick, If you want to do YGO Point Exchange with a card… try the Booster Pack Bundle which is directly 10 Packs at a price of 6000YGO Points.

/>because there must be at least 1 strong card in it… I have tried this many times… when the direct exchange was 10 packs, the last one was yesterday I got White Hole…this is a medicine to elevate users Dark Hole which is getting more and more…

hmm.. it’s hard to write.. that’s all the trick for this time.. hopefully it can help the starters “Duelist on the right track” oh yeah, I took the picture above when I was fighting an international duelist… haha ​​just think of it that way .. 😀
with a final score that is very difficult to determine… because they are both strong… but in the end they can be defeated too… 😀

Nb: A little leak… The trap card that I’m most afraid of right now is Mirror Force…

because the effect can make us hesitate to attack … and buy it … there are also users who have 3 mirror force…(because the card limit that can be used is 3 )
But now I’ve got the medicine too… hehe but it’s still a secret huh…
maybe friends have a way to beat this card… just share it, buddy in the comment box

Presence YugiOh Duel Links which can be played on Android or IOS… Curious?