Inkscape a few months ago has released the Major 1.1 version which has quite a lot of changes and interesting features. I have discussed this in the July Article about Inkscape Software Vector Release Major Update 1.1,

There I also learned about Inkscape more deeply, including the features in it, in that version, because previously I was still having trouble getting important features and had to install additional community-developed extensions, but in the latest Inkscape,

Inkscape is supported by Active Community

It’s also easy to learn Inkscape, because there are many Active Inkscape Communities, on Facebook, Web, Youtube, and even from other Social Media Platforms.

This is the link from Inkscape’s official website, community section

Various extensions, many have been added to Features

important features have been added very much epicso you don’t have to bother anymore to find extension addition to that, because it’s already integrated.

Inkscape’s future, looks like it’s going to be as bright as 3D blender

Interesting! for software Open SourceI think the future of Inkscape is very bright, as is Blender 3D which is 3D software is starting to be widely used animation studio.

Because the features developed by the community are growing faster.

Yup, there are lots of interesting features in Inkscape, when we explore deeper, we’ll try to explore slowly… 🙂

So for those of you who are really interested in the field of design, you can already use the software without having to pay a monthly license fee..

And this is powerful enough, not only for design practice, but also for making real design works that can make business opportunities for all of you, even those who are still in school 🙂

I even tried this Inkscape on a Celeron 4020 Processor with 4GB RAM, Lancar Jaya, God willing, for those who have a limited budget, they can use Inkscape… although a bit patient, but it can be done.

“Practice patience” – use what you have now, don’t look left and right, everyone has a different path.

Yesterday, I tried it on my sister’s laptop, it worked… and it went pretty smoothly, although I had to turn off various features on the laptop, such as I changed the default browser to Firefox, I deleted the trial antivirus, I used Microsoft’s default antivirus, that’s enough in my opinion.

then I disabled various startup processes that were not from Microsoft…

Unfortunately, the laptop I bought was still an ordinary hard drive, not an SSD, because the SSD might be faster.

Laptop prices for this pandemic period are indeed expensive, 5 million Rupiah can only get Celeron… even though I used to be able to I3 for laptops…

I use OpenSource software, even the operating system is also Linux, can you use Inkscape?

Of course you can, because Inkscape is in the OpenSource environment…

That’s right…. That’s all right, bro, for a Creative Studio 🙂

What is Inkscape’s storage extension format?

The format is SVG(Scalable Vector Graphic) which can be scaled to any size without compromising the quality of the images, this is the principle of Vector, But inkscape has its own SVG model, Inkscape SVG the name… but still it reads SVG and can be opened in aobe illustrator or other software that supports SVG, because SVG is actually a format optimized for the web. 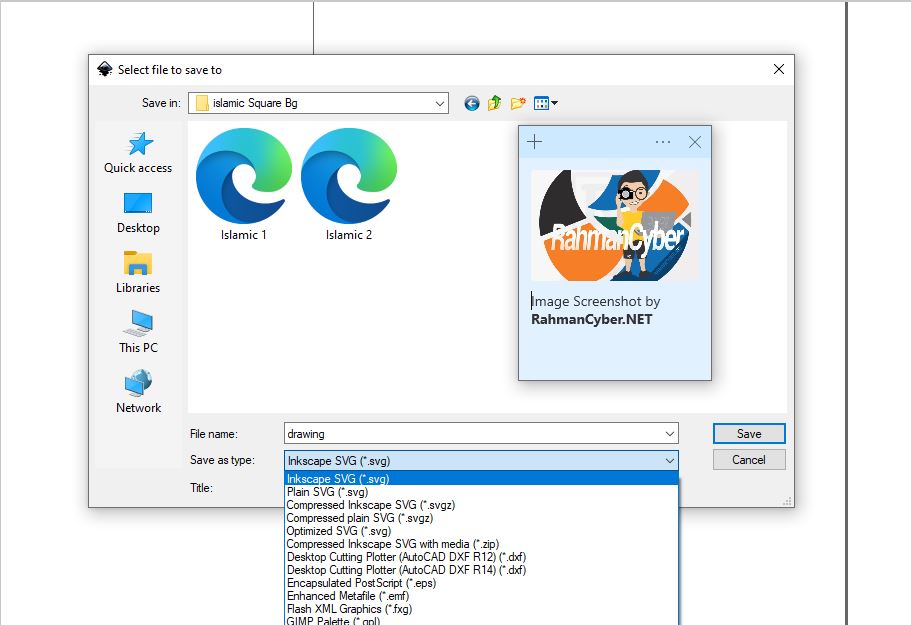 What Inkscape can do

I try to summarize it here, so that it is centered… so in this article it is actually for mapping Inkscape learning🙂 whether that’s what is discussed in the form of a regular article on RahmanCyberas well as articles in the form of Questions and Answers on Quesearch by RahmanCyber ​​NET.

This is an important thing… EPS (Encapsulated Post Script) this is the widely accepted format in Microstockso if you play microstock, then you can use inkscape for that.. although some microstocks like Adobe STOCK they accept files with the extension .SVG format, I really like Adobe Stock because of this.. from various existing Microstocks and I’ve tried, in Adobe Stock, we can upload vector files with .SVG format

This article appeared on Quesearch, so there is a question about it, possibly a previous Corel Draw user, asking if inkscape can powerclip like in Corel…

The answer is Yes! In Inkscape it’s called Clip… even we can easily create isolated objects using this feature, if you’re a designer who likes to create templates, then this feature is for you.

You can also watch a short tutorial on the Quesearch Channel created by RahmanCyber ​​NET.

This is very important, because in Adobe Illustrator, this is a function of creating a rectangular object whose sides have the same size, or the side side is the sum of the vertical sides for the rectangle.

For example, Perfect Square each side has a value of 3000px, so to make a rectangle, the sideways value must be a multiple of 3000px, not less than 0 comma…

So really the value is perfect, the same…

For example, in the article create Basic Shapes in Adobe Illustrator which I have shared on the RahmanCyber ​​NET Multimedia Tutorial Website

4. Inkscape’s AutoRecorvery feature, saves you from losing Design results due to Force Closed or Crash, Hang

Yup! indeed you should save your project files at certain intervals to anticipate if the application crashes, especially if your PC’s resources are full!

But the name of humans can just forget, let alone we focus on being creative… 🙂

That’s why it turns out that in Inscape there is an Autosave feature… even though the folder is hidden, but I’ve written a complete trick about auto recovery inkscape… in the article How to Overcome Inkscape Crash forgot to Save Vector Document (Force Closed)

The article focuses on discussing this.. so, you too can be relieved, especially if your clients are waiting for you for hours beside you when designing…

Imagine if you have waited a long time, suddenly FORCE CLOSED! because you are so passionate about making design curves and many variations of effects that without realizing your PC’s resources are on the threshold … or already red … for example in the RAM is already 100%

How to View Resource Status, you can use Windows Task Manager If you are using Windows 7, 10 or Windows 11… 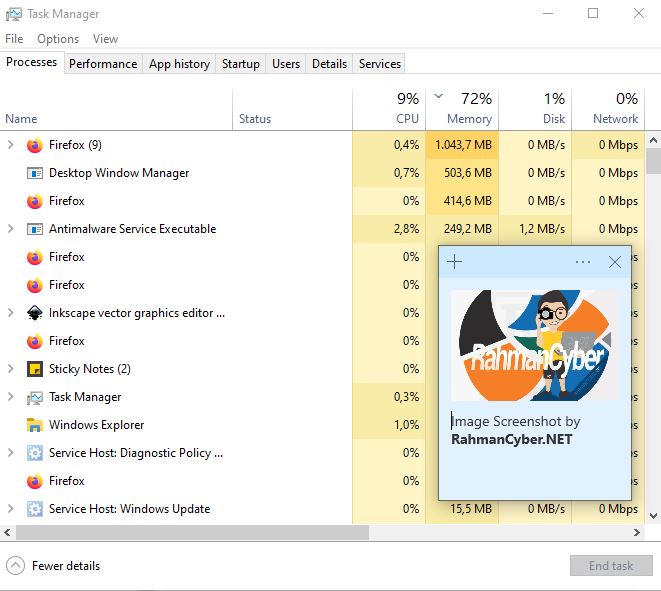 You can see various tutorials about Windows at RahmanCyber ​​Lite

This Pen Tablet is actually an additional support device, because if you already have a mouse on your computer, then you can already design with it freehand use your mouse, but if you want it to be fast and varied, you can use a Pen Tablet, or a Graphics Tablet that mirrors directly to a PC, so you can draw more creatively… 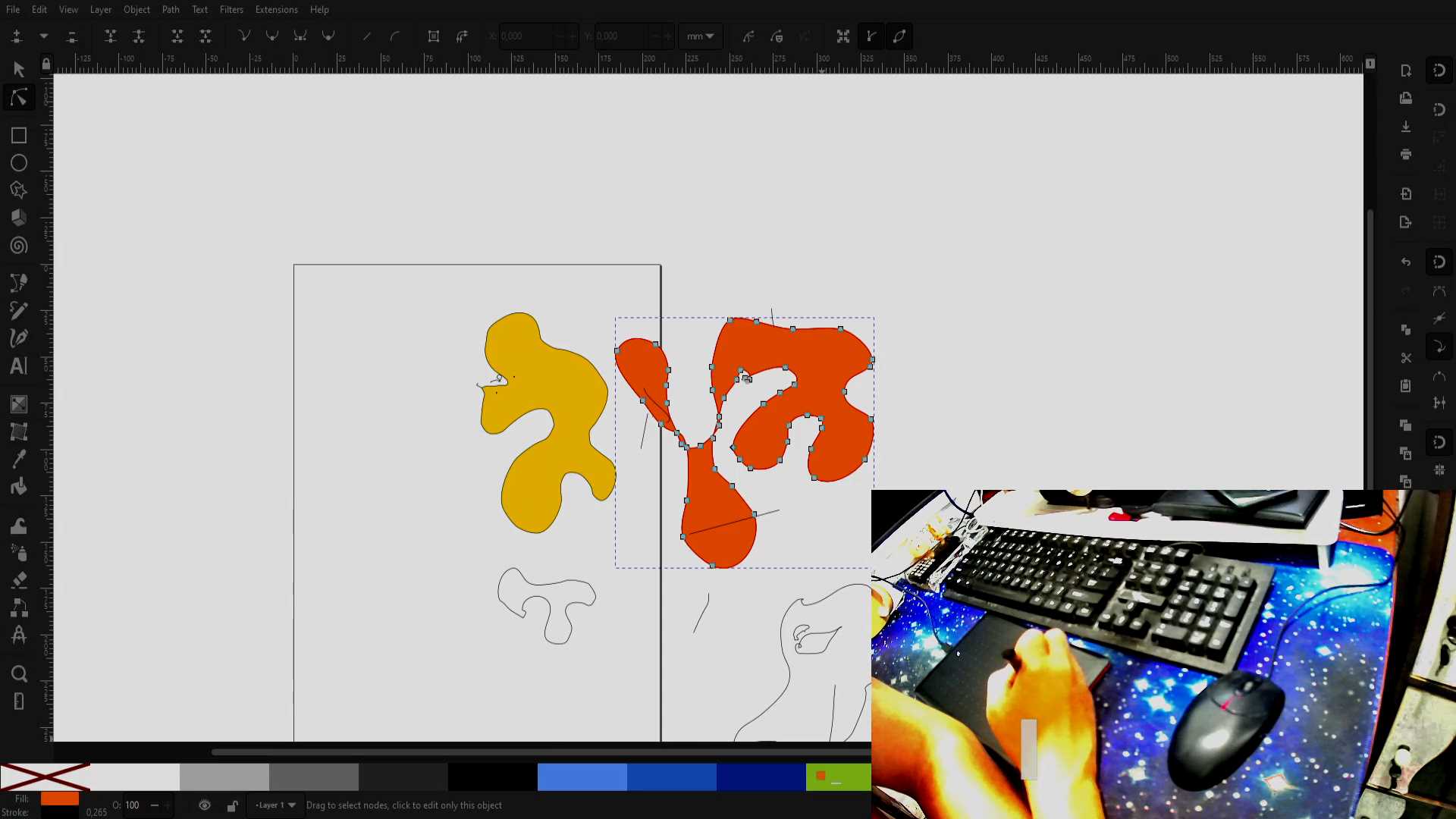 It’s suitable for realistic illustrations… but if it’s for ordinary vectors, such as flat designs or those that don’t go in a realistic direction, a mouse will suffice.

And this I use for Inkscape good luck! and can make more varied drawing designs such as writing on paper…

It’s just that, because this is a version that doesn’t mirror the screen, we need to really focus on the writing movement and the monitor screen display…

6. Can use Shortcuts / Keyboard Shortcuts for Important Functions

Every software, of course, usually has a shortcut code, usually a combination of keys or keys individually on the keyboard, as well as inkscape, there are shortcuts that you can memorize to speed up your design work.

that’s our discussion about Inkscape Learning Tutorial in Indonesian which we try to arrange in a structured way on this page.. 🙂